I wish I could tell you that my journey to get where I am today has been filled with acceptance and encouragement but unfortunately, I can’t. When I was growing up, I had no positive LGBTQ role models to look up to, and so it took a long time before I began living my truth. Now that I am, and especially now that I’m hoping to be the first trans woman to play for the WNBA, I want trans youth everywhere to know that they aren’t alone.

I spent the first 30 years of my life running away from myself and toward what society expected of me. I knew when I was around 6 that I was a girl but didn’t know how to tell anyone. Religion told me those feelings were wrong and my abusive stepdad would have beat me, so it was safer to ignore it and bury those feelings deep inside. Thankfully, I became obsessed with sports; particularly basketball. I was always finding ways to be on a court somewhere. Even at home I would pretend I was hitting the game winner of the Finals while throwing a piece of rolled up paper at a trashcan in the corner of my room. If I wasn’t playing basketball, I was watching it on TV. I even slept with my basketball like kids normally do with a stuffed animal.

As I entered my teens, it became harder to suppress the feelings of gender dysphoria. I struggled connecting with others because I couldn’t relate to them and if it weren’t for basketball and the other sports I would play, I wouldn’t have had any friends. I often felt very isolated and alone, and during those moments my mind would often wander to dark places and I’d want my life to be over. When that would happen, even if it was late at night, I’d pick up my basketball and go to a court because it was the only place I truly found solace. Nothing mattered on the court but putting the ball through the hoop. I could let go of all the noise, stress, and self-hatred, at least for a little while and just be.

During high school, basketball was no longer enough of a distraction from my dysphoria, so I joined the local church. I believed if I prayed hard enough, the feelings of being a girl would go away. I became extremely active in the youth group, bible studies, youth choir, and any other activity I could join. The best part was that we were always playing in basketball or softball leagues, so I had a double distraction! I decided to fully give my life over to God and religion by pursuing a career in ministry and giving up my dreams of playing professional basketball.

I attended a Baptist college and it was the first time in my life that I felt like I fit in. I was surrounded by other people who all loved sports as much as I did. We were always playing basketball; in between classes, after classes, after dinner, until 2 am. If we weren’t on the court, we were playing in softball leagues, flag football tournaments, volleyball, and ultimate frisbee. While at this college I met my wife, got married and was sure my life was headed down a path of minister, husband, and father. I could finally leave the feelings of being a girl in the past and move forward with my life.

Things didn’t quite work out that way. In 2011, the façade came crashing down when my wife asked for a divorce. I was severely depressed and on the brink of suicide before I decided to give myself permission to be free in my identity and transition into the woman I had always been on the inside. It took a few years to navigate transition and my new life because it was during this time that I lost my job, my mom refused to call me her daughter, and most of my friends decided to reject and preach at me. Basketball was the last thing on my mind for the first time in my life.

Once things settled and I had moved to a new city, I began to miss being on the court, but I struggled with how it fit into my new life. As trans women, the last thing we want is to be “clocked” and have people stare, so we obsess with being overly feminine to be sure we are seen as the women we are…as if there is only one type of woman. I focused on this societal perception of femininity and began modeling and walking in fashion shows and even though it was fun, I struggled to enjoy it. I had a hard time connecting with anyone because this wasn’t my world or passion. I truly missed the game of basketball and talking sports with friends. 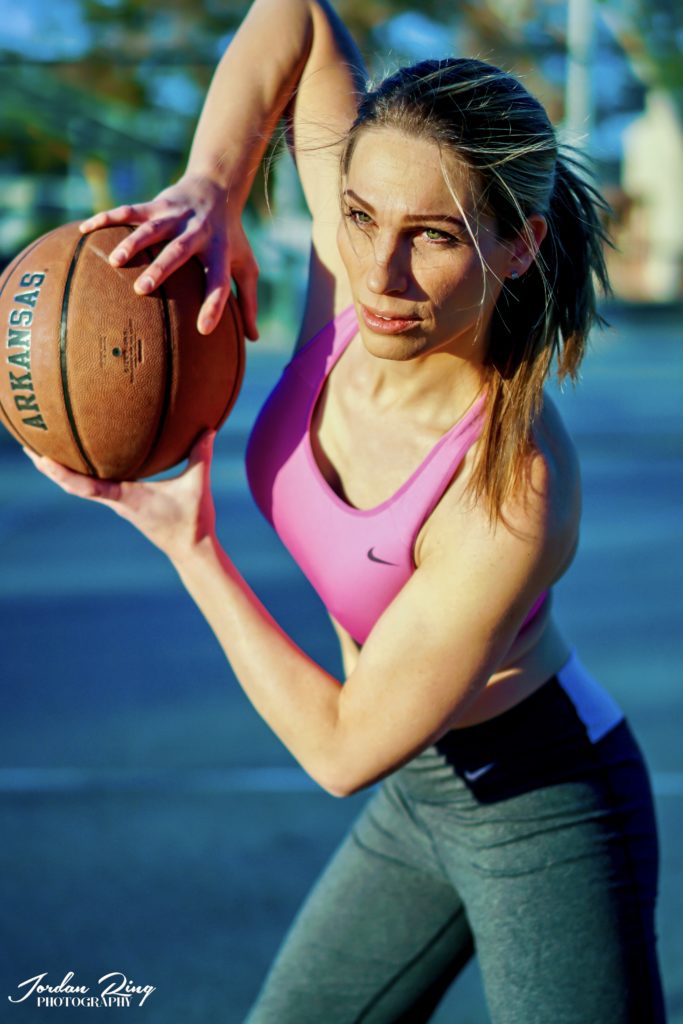 One night, while watching SportsCenter (as I did every night religiously,) I saw a few Top 10 highlights of WNBA plays and I immediately began to daydream about being in the league and in those highlights. I started watching WNBA games regularly and would go to the basketball court immediately after to work on my game. Knowing most professional athletes begin to retire at my current age, I realized this was likely only going to be a daydream. Then one night, I discovered Sue Bird, my favorite WNBA player, was actually a bit older than me and she still dominates… (I’m not saying or implying I am or could ever be as good as her, one could wish!) It did, however, give me hope that I could pursue my dream, even at my age.

Realistically, it may be too late for me to pursue a professional career in basketball, but I’m going to try anyway because it’s not just about me anymore. I decided from day one of my transition to share my story online and to be as vocal as possible so I could help educate, encourage, and inspire. I know that it’s doubtful I’ll make it onto a WNBA team but if I can help create the policy that allows other trans athletes the freedom to pursue their dreams, then I consider that a success and is the biggest reason I want to try out for a team. I want to be the visible role model for others that I didn’t have.

Currently, transgender youth are being attacked all across the country because people are afraid of what they don’t know. It is crucial that we help erase the stigmas and fears of trans athletes so our youth aren’t further isolated by being pushed away from sports. The sports world is one of the few places that truly brings us all together as a community, and LGBTQ inclusion within that is critical. It sends a message to the rest of the world that labels don’t matter, and equality is for everyone. We should all be free to live our truth, love ourselves, and pursue our dreams.