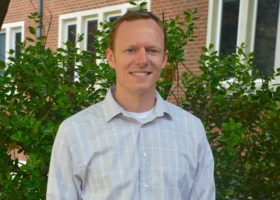 Adam Love is an associate professor in the Department of Kinesiology, Recreation, and Sport Studies at the University of Tennessee. His work is driven by a desire to identify and develop ways sport and physical activity programs, organizations, and institutions can operate in a more ethical, just, open, democratic, and accessible way. He has authored more than 40 refereed journal articles and book chapters and has written extensively about the inclusion and exclusion of transgender athletes in sport. He hopes to produce scholarship that helps people think about how sports can produce more positive outcomes, more often, for more people. Anima Adjepong is a sociologist, critical race, gender, and sexualities scholar whose work focused on Ghanaian cultural politics and social justice efforts. Anima is a postdoctoral fellow at the University of Cincinnati Taft Research Center. Their first book Afropolitan Projects (working title) used transnational ethnography to examine the cultural politics through which class-privileged Ghanaians position themselves as cosmopolitan Africans and citizens of the world. Right now, they are researching the relationship between women’s soccer and gendered articulations of citizenship in Ghana, where soccer has been used to promote nationalism. Cassie Comley received her Ph.D. in Sociology and Graduate Certificate in Women’s, Gender, and Sexuality Studies from the University of Oregon. Her work centers on the voices of marginalized communities, examining the ways they combat discrimination in sport. She’s interested in Latinx surfers’ strategies for maneuvering traditionally white male-dominated and how they are carving out empowering spaces for themselves. This empirical research has inspired her to start a non-profit for the local Latinx community in Southern California. Dr. Comley also works with incarcerated youth for the Orange County Department of Education. Cathryn/CJ Lucas is an independent scholar researching, teaching, and writing about sport and physical activity from an anti-racist, transgender perspective. They are also busy working to change the fitness industry through community focused personal and group movement practices.

Ellen J. Staurowsky is a full professor in sports media in the Roy H. Park School of Communications at Ithaca College. She is a fellow of both the NASSM and the AAHPERD Research Consortium. Dr. Staurowsky was a columnist with the College Sport Business News, Women in Coaching Blog, and co-founder and editor of the LBGT Issues in Sport: Theory to Practice Blog. She serves as a senior writer with Sports Litigation Alert and Legal Issues in College Athletics. She is the lead author on several of the Women’s Sports Foundation’s comprehensive and expansive research reports and has received numerous honors including the the National Association for Girls and Women in Sport’s President’s Award, the University of South Carolina College Sport Research Institute’s Lifetime Research Achievement Award, and the Laughlin Education Award from Ursinus College for her contributions to education. Faye Linda Wachs is a professor of Sociology at California State Polytechnic University, Pomona. Dr. Wachs received her PhD in Sociology from the University of Southern California, along with a graduate certificate in gender studies.  Her book, Body Panic: Gender, Health and the Selling of Fitness was the recipient of the NASSS Distinguished Book Award in 2010.  She is a 2020 winner of a CSU Jose A. Gomez award for Faculty Excellence and the 2017 George P. Hart Award winner for outstanding faculty leadership. Dr. Wachs is the former president of the NASSS and is currently writing a book, Metamorphosis, on facial paralysis.  In her spare time, Dr. Wachs enjoys hiking, biking, knitting, and spending time with her spouse, son, and dogs.

Jack Turban is a child and adolescent psychiatry fellow at Stanford University School of Medicine. He is co-editor of the book Pediatric Gender Identity: Gender-affirming Care for Transgender and Gender Diverse Youth and is regularly consulted to comment on issues regarding mental and LGBTQ health. He and his work have been quoted over 100 times and he has consulted for the U.S. Department of Defense and major tech companies on issues related to LGBTQ mental health. Dr. Turban earned his MD and MHS degrees from Yale School of Medicine, where he was an HHMI medical research fellow and graduated with highest honors. He completed his adult psychiatry training at Harvard Medical School and has several active research projects through The Fenway Institute, The McLean Institute for Technology in Psychiatry, The U.S. Veteran’s Health Administration,  and Yale School of Medicine. Jaime Schultz is a Professor of Kinesiology, with an affiliate faculty appointment in Women’s, Gender, and Sexuality Studies, at Penn State. An award-winning teacher and scholar, she primarily studies issues of sex, gender, sexuality and sport. Schultz currently serves as editor of the International Journal of the History of Sport and the “Sport and Society” series at the University of Illinois Press. Lindsay Parks Pieper is an Associate Professor of Sport Management at the University of Lynchburg, Virginia. She earned a PhD in Sport Humanities from Ohio State and her research interests include women’s sport history, gender and sport, and Olympic history. Her book, Sex Testing: Gender Policing in Women’s Sports (2016), explores the history of gender verification in elite sport. Sam Winemiller is a scholar of sport studies operating from the feminist cultural studies tradition and specializing in qualitative methodologies. Sam’s research explores issues in the practice and mediatization of sport and recreation, particularly focusing on how people might treat each other with more consideration in these spaces. Sam holds a Ph.D. in Kinesiology and Sport Studies from the University of Tennessee, Knoxville. Sam’s personal involvement in recreation includes outdoor pursuits such as snowboarding and hiking. Originally from Nokomis, Florida, he spent six years working in various capacities at Lutheridge Camp and Conference Center in North Carolina including as supervisor of their Outdoor Adventure Program. Travers is a Professor of Sociology at Simon Fraser University. Their most recent book situates trans kids in Canada and the US, white settler nations characterized by significant social inequality. They are also the Principal Investigator on a SSHRC Insight Grant using video game technology to assess social safety nets for transgender and gender nonconforming children and youth. Dr. Travers has published extensively on the relationship between sport and social justice, with emphasis on the inclusion and exclusion of women, queer and trans people of all ages. Dr. Travers’ first book, Writing the Public in Cyberspace: Redefining Inclusion On the Net, analyzes the ways equity of participation is inhibited in public spaces fostered by new information technologies.  Dr. Travers has been appointed Deputy Editor of the journal, Gender & Society. Vikki Krane is a professor of teaching excellence in the School of Human Movement, Sport, and Leisure Studies at Bowling Green State University and is affiliated with Women’s, Gender, and Sexuality Studies and American Culture Studies. Krane’s scholarship focuses on sex, gender, and sexuality in sport and her book Sex, Gender, and Sexuality in Sport: Queer Inquiries was published in 2019. Krane has had a lead role in establishing the Social Justice through Sport and Exercise Psychology Symposium and has been the editor of The Sport Psychologist and the Women in Sport and Physical Activity Journal.